St. Ignace, MI – (Great Lakes Radio News) – The driver of a semi-truck involved in a seven-vehicle fatal accident Friday on the Mackinac Bridge is facing charges.

The accident happened around 4:00 p.m. on the northbound lanes of I-75 just south of the bridge toll booths.

State Police say a northbound semi failed to stop for vehicles that lined up at the booths.

The semi, owned by Ken Graham Trucking of Brimley, MI, rear-ended one of the vehicles and caused a chain reaction accident.

38-year-old Grant Childs of Fort Meyers, Florida was killed in the crash.

Six other people were injured.

The driver of the semi was lodged in the Chippewa County Jail on a charge of Reckless Driving Causing Death.

The driver’s name is being withheld pending arraignment. 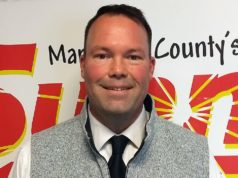