It happened just east of North Dickinson School around 2:45 a.m. central time when a 2009 Chevrolet Impala left the road and rolled onto its roof.

Witnesses said a female driver who smelled of intoxicants was driven away from the scene by someone in a pickup truck.

Troopers located a camp on Calumet Mine Road where the suspect driver was arrested for Operating While Intoxicated and Leaving The Scene of a Crash.

She was lodged in the Dickinson County Jail.

Her name is being withheld pending arraignment. 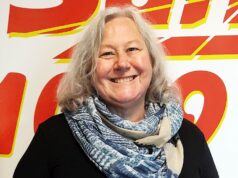